In accordance with the complex scenario presented by the country’s electric energy system, the management of the Electric Company in Ciego de Ávila estimates a deficit similar to yesterday’s for this Wednesday, October 12.

The limitations in the availability of generation yesterday had a maximum of 85 MW, during peak hours, and the average of affectation by circuits was of 11 hours and 8 minutes, with a maximum demand of 117 MW registered at 7:30 pm.

On the other hand, the Elecricity Copany, in its update of the system for the day, announced that it estimates a maximum impact of 1,150 MW due to generation capacity deficit during daytime hours.

For peak hours, the entry of unit 3 of CTE Santa Cruz with 60 MW (in start-up process) and the entry of 98 MW in diesel engines is estimated.

With this forecast, an availability of 1,942 MW and a maximum demand of 3,290 MW is estimated for this schedule, for a deficit of 1,348 MW, so that if the expected conditions are maintained, an affectation of 1,418 MW is forecast for this schedule, of which 110 MW due to the damages caused by hurricane Ian.

In view of the complexity of the system, the management of Electricity Company informs that it was necessary to restructure the blocks and create a new schedule of affectations, clarifying that sometimes, due to the high deficit, it is necessary to affect circuits of the following blocks: 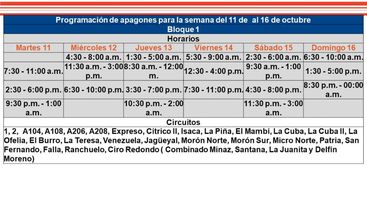 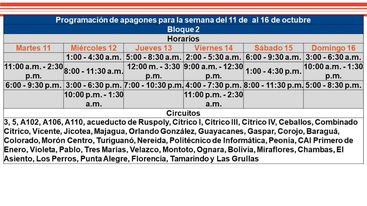