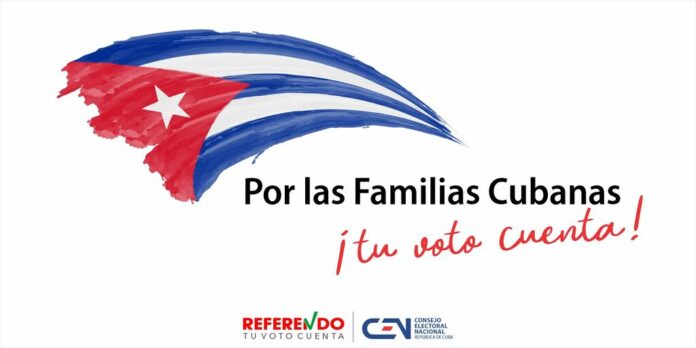 Cuba will be the first country to submit a law such as the Family Code to a process of popular consultation and then to a referendum, said Dr. Oscar Manuel Silveira Martínez, head of the Ministry of Justice (Minjus).

Appearing on the news program Mesa Redonda (Round Table) together with electoral authorities and the Commission that drafted the text, the Minister emphasized how broad, deep, transparent and democratic the whole previous process has been, which began exactly one year ago and will conclude on Sunday 25th when Cuban voters will vote in favor of the new legislation.

He clarified that even though last December the National Assembly of People’s Power approved version 23 of the bill as a law, the referendum will validate its validity and enforcement.

He recalled as a significant moment in this year of intense work and exchanges to enrich and improve the legal text, the collective contribution of many people and especially since 2019 of the drafting committee, convinced of its importance.

Also, the process of specialized consultation with 47 institutions and social groups, including universities, a method that will be applied in the future for new legislative projects, given how much it enriches them with multidisciplinary views.

Other very important moments were when the deputies, last December, analyzed and approved the final text, and from February to May of this year it was submitted to popular consultation in communities and workplaces.

On the other hand, he highlighted the discipline and dedication of the more than 30 members of the Drafting Commission, and as regards communication, the role of the media and the publication of the Family Code in the Official Gazette of the Republic, of which nearly 692 thousand copies have been sold, and in other platforms.

But the main communicational act of the pre-referendum process, Silveira Martinez emphasized, has been the direct contact with the people in the assemblies of popular consultation, in which in an atmosphere of trust the people presented their ideas, doubts or proposals.

The Minister of Justice reiterated that the people will have a Family Code that protects all institutions of Family Law and individuals, eliminates vestiges of discrimination and rejects violence, among other favorable impacts.