Those of us who voted this September 25 at the polling station closest to our homes, witnessed a democratic exercise with the opportunity for each citizen to contribute to place an old Law in the archives and put into effect a new one for the future, in tune with the realities of Cuban society today.

This is how María Victoria Sifonte Ayup, a jurist from the province of Ciego de Ávila described it, who argued: «it is the one that is going to represent the young people, us when we are grandparents…. 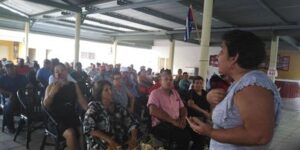 «We jurists have been longing to have it for many years because it will solve complex situations in the country. We have had difficult and sad cases, such as the grandfather willing to take care of his grandchild, however, the father of the child who is an alcoholic has more rights; in the face of problems like this we were left with our hands tied.

«We could have in the future more immediacy in the judicial processes. Besides, what greater democracy could exist than for such an advanced law to be made available to the people for its definitive approval,» said the head of the Provincial Prosecutor’s Office in Ciego de Ávila.

Her co-worker Mayda Montejo García cited other examples of the advanced legislation, such as parental responsibility, the best interest of the child, progressive autonomy, adoption, solidarity womb and other terms that have been subject to misrepresentation and manipulation by a reactionary minority group to the regulations.

«There is nothing more important than the family, what we are talking about is to regulate a group of issues beyond personal interests with a well thought out norm, so giving a Yes is voting for ourselves, to do otherwise would be an act of selfishness», opined Gonzalo Reytor Vázquez, worker of the Construction Materials Company (AVILMAT). 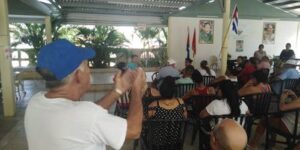 For his part, Julio Fontaine, also a member of the Construction Union, spoke of the importance of voting consciously and not allowing oneself to be deceived by campaigns of the enemies of the Revolution. «The Peter Pan Operation -he gave as an example- took away more than 14 thousand children from Cuban families because many ended up believing that it saved their children».

The opinions before and during the exercise at the polls this September 25, are part of the support to the call of the Workers’ Central Union of Cuba, to what Sifonte Ayup defined: «Yes, it is the vote of the heart because the Family Code is the greatest thing that we jurists have now, it is a law to fall in love with…».