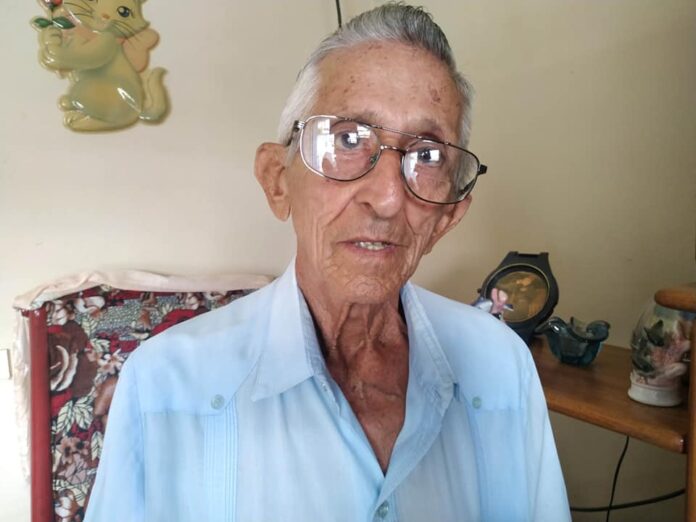 A small pet that greeted us at the doorway of his house on Vasallo Street, alerted him that someone was around his house. In a few seconds we received the welcome of Nelson Mora Ramos, who agreed to our interest in knowing passages of his life.

It was then when we learned that Mora is not from Morón as we thought, but a native of Santa Isabel de las Lajas, a town he left when he was only a few months old, but that he visits it frequently because he has relatives there that he does not forget.

«Santa Isabel de las Lajas, the land of Benny Moré» I told him and it was then that Nelson Mora commented that he was a member of his giant band when he was young, as he was part of the accompanying choir of the Bárbaro del Ritmo in his performances in cabarets and popular dances.

During a period of time he tried his luck in Havana, and it was there where he was part of a show that toured the country with performances in all the provinces, where he interpreted boleros and guarachas.

He says that he did not like his stay in the capital and decided to return to Morón and here he joined the Miramar orchestra as one of the four singers.

Mora Ramos was subjected to a national evaluation and when he passed, he went on to form the Praga group, and finally the rural group Ecos de la Trocha.

My vocation since I was a child has been music, but economic circumstances forced me to work as a bartender at the Cunagua Bar, at the Crucero unit and in the gastronomic area of the Morón railway terminal.

Nelson Mora recalls that he was a Nacional Vanguard worker for four years, was national laureate of the Culture Union, among many other awards.

«My calendar already marks 81 years of existence, I present serious cardiac ailments, and other pains typical of age», comments Nelson.

Finally, he adds that he is going through a difficult stage of his life, when loneliness shelters his present, sheltered in his house escorted only by his pet, but even so, he climbs stages and sings his favorite melodies, although with hurt feelings.