The 39th anniversary of the creation of the Military Justice Organs in Cuba was celebrated in the province with a political and cultural event held at José Martí Park in Ciego de Ávila.

At the meeting Eldelso Pérez Fleitas, president of the Cuban Union of Jurists in the province, reviewed the transcendence of «History will absolve me» and congratulated his colleagues.

The central words were in charge of the young first lieutenant Yerlanis Verona Sordo, who ratified the commitment of the new generation to defend the Revolution at any cost. 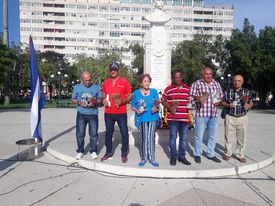 The occasion was an opportunity to recognize five valuable comrades who constitute a bastion of Justice and Military Prosecution in Ciego de Ávila, among them, reservists Major Felix Rio Sousa and lieutenant colonels Nelson Artiles González and Elba Tellez Porta.

The political and cultural event held in José Martí Park in Ciego de Ávila on the 39th anniversary of the creation of the Military Justice Bodies in Cuba, was attended by representatives of the Party, the General Staff, the Military Region, the Prosecutor’s Office and the Courts in the province.