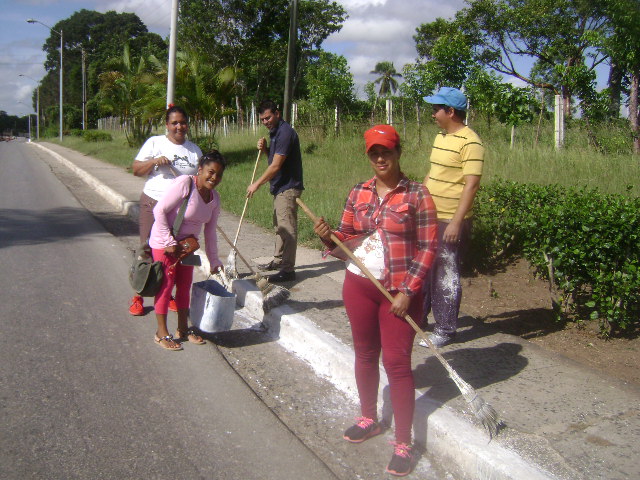 The realization of cleaning and beautification tasks with the participation of representatives of different entities and neighbors of the area are dedicated in Majagua to the new anniversary of the triumph of the Cuban Revolution.

As part of the day of decisive effort with Latir avileño without wasting a day, among other actions, work of mopping, giant collection of solid waste and painting of sidewalks, which is also part of the program «Abrazando el Barrio» (Embracing the Neighborhood).

Norma Rodríguez de la Cruz, administrative worker, described as very important and necessary the usual mobilizations, not only to beautify the environment but also because it contributes to stop the outbreak of dangerous contagions such as dengue, which transmitting agent is the Aedes mosquito.

The official of the Municipal Committee of the Communist Youth Union, Alexis Moya Rodríguez, said that participating in the sanitation activities organized at the level of neighborhoods and communities is proposed to become a permanent obligation of the new generations who live there.

During her speech at the meeting of the temporary group of the governing body, Misleydi Abad Modey, first secretary of the Municipal Committee of the Communist Party of Cuba, acknowledged the results of the «Embracing the Neighborhood» program and announced that every Friday the efforts will be concentrated in a different Popular Council, to which she added: «This week the head village will be the initiator».