In the presence of Brigadier General Rafael Ruiz Pérez, member of the National Directorate of the Association of Combatants of the Cuban Revolution (ACRC), the men and women of Ciego de Ávila who participated in the struggles for independence, paid tribute to Juan Almeida Bosque.

In the meeting held this Sunday, in which the life and work of the Commandant musician was remembered on the thirteenth anniversary of his physical disappearance, the membership card of the organization and distinctive seal were given to 10 valuable comrades of the Ministry of the Interior and the Defense Council.

The occasion was an opportunity to recognize the members of the commissions of divulgation, informatics, communication and medical, among them, Héctor Paz Alomar, Humberto Pérez Escobar, Cecilio Jiménez Marroquí, Rigoberto Pérez Pérez Pérez and Ángel Cabrera Sánchez, who evoked unforgettable passages of the book El General Antonio Maceo, one of the many works written by Almeida.

Efrén de Jesús León, an invader of Che’s column, gave an emotional testimony of anecdotes lived before the triumph of the Revolution that show the lasting legacy of the author of La Lupe, in his struggle to change the degrading reality that prevailed in those times.

Brigadier General Rafael Ruiz Pérez, member of the National Directorate of the Association of the ACRC, called on the Avilanian fighters to remain in the front line of combat, as taught by the musician Commandant, who also served as president of the organization.

Part of the cultural political activity dedicated to the unforgettable guerrilla fighter, carried out in the territory, was the laying of bouquets of flowers at the historical site that bears his name located at the headquarters of that association in the province.

The tribute to Juan Almeida Bosque in Ciego de Ávila was also attended by Alexy Ojeda García, member of the Provincial Bureau of the Party, Vice Governor Ania Rosa Francisco Malde, heads of the political section of the FAR and the MININT together with a representation of combatants of the province. 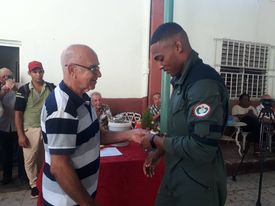