Silence. The microphone opens. It is October 10, 1952 and Radio Cuba starts broadcasting from this center of Cuba that later, thanks to the history they founded, will become the capital of Cuban broadcasting.

Then it came the digital era. The station grew, the country changed. Ciego de Ávila is now a province and the number of listeners is much greater. We abandoned the tapes, the tape recorders, even the real audio came on the Internet.

Soon October 10, 2022 arrives and we could begin to tell the story as it is. Quiet, the microphone opens. There will be more noise than usual in the booth. The listeners who call in every day this time will do so to congratulate «the house». Those who carry on their shoulders the tradition of 70 years will live it as if it were their own birthday.

Radio Surco inherited in 1959 what was seven years before the radio station that supported the popular struggle, a change of name to emphasize, perhaps, for whom it was speaking with the triumph of a Revolution for the humble.

Since last year, the station has been planning a birthday to match the significance of the date.

Dianelis Brito Hernández, communicator of the institution, says that the happy coincidence with the centenary of the Cuban radio in the same year served as a pretext to celebrate more in a big way.

Voluntary works and a construction process that has already finished a theater and is about to renovate the master studio, have the place «upside down». The smell of fresh paint and the greenery of the garden are collateral symptoms.

«We have organized meetings on the history of radio to which we have invited not only historians or specialists, but also founders and colleagues who are living history.» The same ones who have given voice to the propaganda pieces that have been circulating since January of this year, together with active broadcasters and other avilanians who work from national radio stations. There is no doubt that those who have retired are already personalities of the avilanian culture.

But if we talk about dedicating a whole life to radio, and to Radio Surco, there are examples right there, who still direct, write, do journalism and broadcasting from CMIP.

When on the night of the 9th the collective meets with part of the cultural life of the city and some of its listeners, of its public, it will be a propitious occasion to recognize the great number of workers who have been there for 20 or 25 years, by means of the Raúl Gómez García medal awarded by the Union of Cultural Workers.

Luis Gutiérrez Abreu will soon be an Artist of Merit and will receive the Cuban Radio Microphone as a distinction, although he is not yet in the age of tributes.

Invasor steals 15 minutes of his morning work as a broadcaster to get confessions out of him: he has already dedicated 31 years to radio, since he started as a journalist in his native Majagua, until today.

Along the way he qualified as a broadcaster, studied directing at the Faculty of Arts and Audiovisual Media of the Arts Superior Institute, and has found in his passion for experimenting an impulse with «an electricity strike» efficiency.

He still remembers that playing (because it was a character and not simply a voice-over job) a not at all stereotyped guajiro for that space called Del campo y punto, was a challenge and left its mark on him. Now, his three programs are among the most listened to, and that pleases him.

«My life goes around radio. Because I work in the morning as an announcer, in the afternoon as a director, and again as an announcer in the evening. And radio demands a lot, or at least I demand a lot of myself on the radio.» 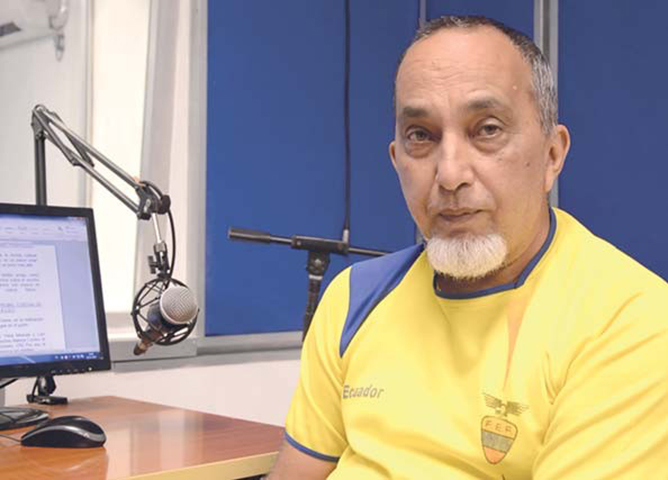 «I respect the established formats, but I like to experiment,» says Luis Gutiérrez.

Is avilanian radio closer to tradition, to the romantic, or to modernity with its maelstrom of media and supports?

«I think that here, at least, radio still retains much of its romanticism. There is not enough experimentation and we are not yet incorporated into the dizziness of everyday life. We have several young people, digital natives, who could bring us closer to that, but, paradoxically, I think the benchmark we should follow is that of the dedication, rigor and discipline of the founders».

There are names inevitably linked to the history of Radio Surco, such as Alberto Pardo, for example, who gave voice to the slogan of the radio plant and stood at the microphones when it was still Radio Cuba.

«By that time – Invasor said about a year ago – Roberto Aguilar, Orlando Castellanos, Manolo Sariol, Mario Héctor Miranda, Fernando Alcorta, and Cloroberto Echemendía Ulloa, considered the first martyr of radio broadcasting in the country, were already there. There were no tape recorders and they did everything live, manipulating the revolutions of a record player».

To them we owe one of the most important reasons for the pride of Avilanians: to be the Capital of Cuban Broadcasting. Since that First National Meeting of the Speech Chair of the Cuban Institute of Radio and Television, in April 1993, the signature of broadcaster Héctor de Soto García, former secretary of the chair, attests. «Ciego de Ávila has been, and continues to be with its valuable and continuous replacement, the center of national speech».

From history to today

What are listeners saying? Where is Radio Surco in 2022? These are not vain questions when, all over the world, radio has to «adapt» to more vertiginous, visual and interactive logics of information consumption.

From the center of the island, we are talking about a radio station that preserves the affection of the public and a mission that could well be called primitive: to accompany. To wake up with the peasant who wakes up early, to make the night lighter for the sleepless, to strip the office days of tedium, and most importantly: to dispel the loneliness of grandfathers and grandmothers when the rest of the family goes out to work and study.

Yunior Gutiérrez Gómez, main specialist of the Research and Quality Group, says that only in August Radio Surco conducted its last audience survey, with a sample of 400 Avilanians.

«We have had better ratings, but the fact that we got an 86 percent audience share is very good in these times. We also confirmed that senior citizens are our most loyal audience».

And that there are programs that are already part of the soundscape of an entire province, such as Once variedades, A ritmo del almanaque or Atrévete. In general, those where there is more music, or where listeners listen to themselves the most.

It is also a good sign that there are new programs that are already making their way into the public’s preference. Contigo en casa, Multipista 102.7 and Señal FM have been on the air for less than two years, but more than half of those surveyed listen to them.

The no longer so new technologies add another type of audience because, as Yánosik Torés Agete states, radio is now also a multimedia platform, and everything that goes on the air goes to the web. The real audio on the Internet brought with it a different form of consumption: Avilanians outside the country use it as an antidote against nostalgia. The sound of Radio Surco brings them, for a while, back home.

This is how a radio station moves through history. Growing and changing along with the audience. In the nerves of its people every time the «On Air» indicator lights up. In the recognition of the public, who already feel the broadcasters as friends. There are no formulas. The path has been carved day by day. Every second.