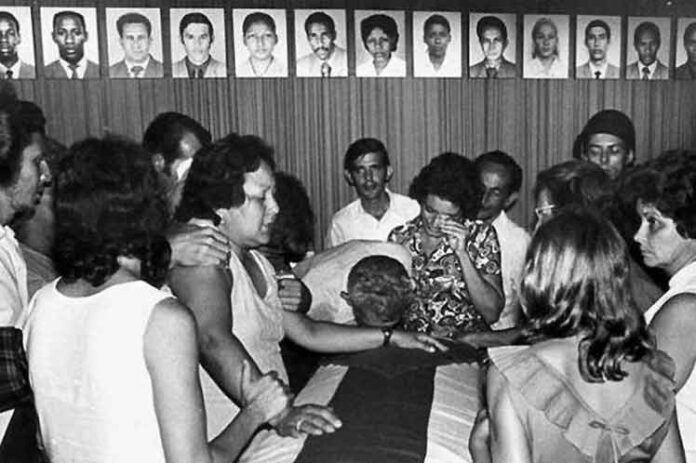 Cuba remembered yesterday the 73 victims of the 1976 terrorist attack on a Cubana de Aviación plane off the coast of Barbados.

The crime of Barbados, as the mid-air destruction with bombs installed inside the CU-455 aircraft is known, is considered one of the most brutal acts of terrorism carried out against the Cuban Revolution by people in the service of the U.S. Central Intelligence Agency.

As a result of the crash, 57 Cubans lost their lives, most of them young members of the fencing team returning from the Central American and Caribbean championship in Caracas, as well as five citizens of the Democratic People’s Republic of Korea and 11 Guyanese who were traveling to the island to study medicine.

According to investigations, the crime was orchestrated in Venezuela by Cuban-born terrorists Luis Posada Carriles and Orlando Bosch, who used Venezuelans Hernán Ricardo and Freddy Lugo to place the bombs inside the plane.

Ricardo and Lugo were sentenced to 20 years in prison, while Bosch, after a brief period in detention, was acquitted on technicalities and Posada Carriles was imprisoned, but managed to escape with the support of prison guards.

Later, Posada Carriles and Bosch found refuge in the U.S. city of Miami, where they continued to plan violent and destabilizing actions against the Caribbean nation until their deaths.

In 2010, Cuba established October 6 as the Day of the Victims of State Terrorism, in remembrance of the more than 3,478 Cubans who have lost their lives in this type of crime.