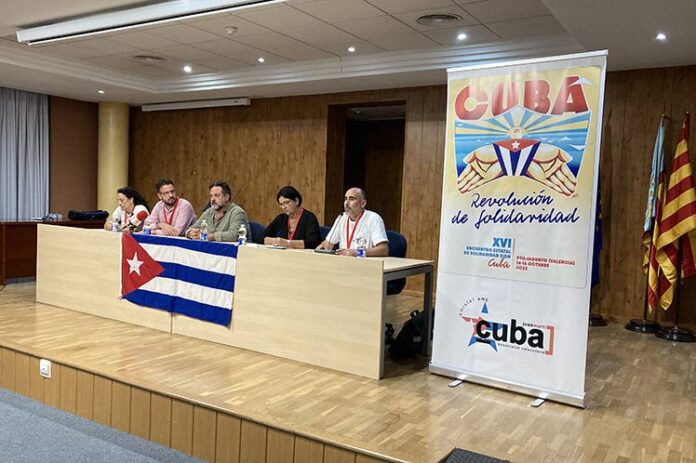 Scientific advances in the field of health and international cooperation were highlighted here today as Cuba’s assets in the fight against the U.S. blockade.

During the 16th National Meeting of Solidarity with Cuba in Spain, in Puerto de Sagunto, 25 kilometers from Valencia, the Cuban scientist of the Center for Molecular Immunology (CIM) Belinda Sánchez, elaborated on successes, setbacks and obstacles to achieve progress, for example, in the production of vaccines.

In a discussion with the Spanish MEP Manu Pineda, the first vice-president of the Cuban Institute of Friendship with the Peoples (ICAP), Noemi Rabaza, and the deputy and historian Elier Ramirez, the CIM researcher said that the scientific consecration in the Caribbean island is remarkable.

We have no time to lose and we reiterate at every moment the possibility of opening spaces in the face of the U.S. blockade, such as the agreement with Buffalo related to the Cuban vaccine against a specific type of lung cancer, she commented.

The CIM and the Roswell Park Cancer Research Center in Buffalo, USA, allied some years ago to facilitate access to equipment and reagents, in order to promote the development of the drug.

The creation of the only biotech joint venture, Innovative Immunotherapy Alliance, with the aim of introducing the drug into U.S. society, is a step forward, although not without its difficulties, although hopeful, said Sanchez.

She also mentioned cases of fruitful exchanges with Italy, where a potential agreement is being worked on, with China and Thailand, among others.

In the panel led by David Rodríguez, member of the Valencian Association of Friendship with Cuba José Martí, the parliamentarian Manu Pineda took the opportunity to announce an event in Brussels on November 16.

It will be a day to celebrate solidarity with the largest of the Antilles, to reject Washington’s economic siege and to project collaboration at continental level at the seat of the European Parliament, among representatives of groups of friends of Cuba in the region.

Noemí Rabaza praised the integrity, dedication and enthusiasm of the associations in solidarity with the Island in especially delicate economic times in which all collaboration is highly welcome.